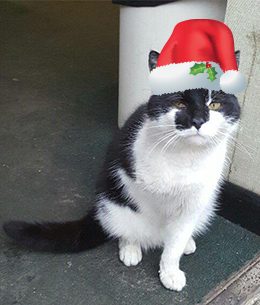 In this Season of Goodwill, it is the turn of Tripod the Cat, the three-legged Head of Pest Control based at Linburg’s Derby depot, to choose the charities to which Linburg make their Christmas donations.

Tripod has worked for Linburg for a number of years, having hopped-in one day in search of work. “We discussed the possibilities and negotiated Contract Terms over a bowl of Tuna & Prawn” recalled Linburg Director, John Hadaway. Tripod has never looked back, initially taking on a part-time pest control role and working his way up to be Head of Pest Control of the entire Company. “He’s a real team player” John continued, “He literally lives at work and always has his paw on the pulse of what’s going on. He’s become the right-hand man – or perhaps I should say the left-paw cat – of Jamie Launder, the Operations Manager in Derby. They’re almost inseparable. In fact, when the depot suffered a small fire recently, everyone was evacuated but when Jamie realised that Tripod was unaccounted for, without giving a thought for the correct procedure, Jamie went straight back into the building to ensure his three-pawed pal was safe. They’re a proper team but I do wish Tripod wouldn’t insist on coming to work every day dressed in the colours of his favourite football team…”

Tripod purred “Not every cat is lucky enough to have a job like mine, so we’re going to give a little support to Cats Protection. I’ve lost a leg and I found it difficult for a while, so I want us to show our support and appreciation for the many soldiers and former-soldiers who have given so much for our Nation. We’re going to give a little support to Style for Soldiers and to Help for Heroes”.
Here are links to Tripod’s chosen charities: