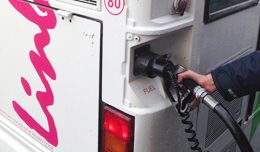 Continuing infrastructure investment by Linburg Coach Hire has recently seen the installation of the Merridale Fuelworks web-based fuel management system across its entire fleet and depots.

The system utilises Merridale Auditor units and vLink vehicle monitoring to enable the Linburg Management Team to keep a close eye on the real-time fuel consumption of all of its buses, coaches and support vehicles from office-based PC’s or even their smart-phones. “This technology enables us to identify fuel consumption issues very quickly” said Director John Hadaway. Bus and coach travel is already one of the greenest and most efficient methods of travel, but with monitoring of this level of accuracy, those “green” credentials are maximised.

“Our previous monitoring system was always at least a month out-of-date and relied on many hours of tedious work with pen-and-paper. With our increasing fleet size, this was becoming untenable” continued John. “Now we can see information for the entire fleet from any internet web-browser. It even tells us when we need to re-order fuel supplies. We spend hundreds of thousands of pounds on diesel each year, so having absolute control in this way has made the substantial investment even more worthwhile”.

“Every Little Helps” As Linburg Step In To Maintain Shoppers’ Buses 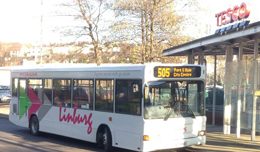 The Shoppers Services link many Sheffield suburbs to the store and operate free-of-charge, five days a week. Linburg Operations Manager, Paul Major reported “Discussions had been on-going for a number of months with Tesco’s agents, but in the end we only had a couple of weeks to put everything in place for the March 10th start date. Our Fleet Engineer, Mark Toon, worked very hard to source additional vehicles and his team burnt the midnight-oil to put the vehicles through a rigorous pre-service Workshop and Bodyshop programme to ensure all passengers had a bus to catch on the first morning”. Paul added that bus and coach travel is one of the greenest modes of transport and went on to say “To be operating services that contribute to minimising traffic on Sheffield streets and maintain a vital link for shoppers is particularly pleasing. Hats-off to Tesco for taking the initiative and supporting these Services with extensive financial support; And not forgetting the team at South Yorkshire Passenger Transport Executive who have supported and advised us throughout the process”. For further information on the Services contact us! 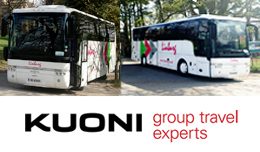 A new development in 2013 has seen Linburg form an operating alliance with Kuoni and Gullivers Travel Associates.

Gullivers is part of the worldwide Travelport Group that contains twenty of the leading travel brands. Kuoni, founded in Switzerland in 1906 by Alfred Kuoni, has long been synonimous with high quality travel and brought that quality to the UK in 1965.

Whilst there are many Coach Companies in the UK., Kuoni & GTA reported that finding those with sufficiently high standards of reliability and professionalism to be entrusted with their prestigious Incoming Tourist business was a problem.
They turned to Linburg to help alleviate that difficulty.

Linburg Director, Gill Dawson, was delighted to be able to sign-off a two-year Contract to provide coaches and drivers to carry tourists from around the World on tours of The British Isles for both Kuoni and GTA. Gill announced in March 2013 that such was the importance of the new clients, that a further development of the coach fleet would see the delivery of another two high-quality, air-conditioned Van Hool tour-coaches from VDL-Van Hool coach concessionaires, Arriva Bus & Coach.
“We have continued our standardisation on the VDL-Van Hool product. The quality is second-to-none and we like the green-credentials of the smooth and powerful “Euro 5” engines. In between commitments with Kuoni and GTA, these coaches will be available for hire as part of our Private hire Fleet from our Derby and Sheffield depots” added Gill. 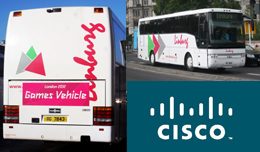 As the official Network Infrastructure Supporter for London 2012, Cisco Systems helped to deliver the most connected Games ever. This meant that Cisco’s network infrastructure underpinned the delivery of voice, video and data traffic for London 2012 over 94 sites with 1800 Wireless Access Points, 16500 IP telephones, 65000 active connections and 80000 Data Ports.

Transport was required for 800,000 spectators & 55,000 athletes, officials and sponsors . However, for the ground-transport of their most valued executives and guests between venues and hotels, Cisco relied on Linburg Coaches to make the connection, providing luxury coach transfers for up to twenty-two hours a day around, across and throughout the Capital City with a team of drivers, coaches and support staff stationed at Heathrow Airport ensuring Cisco succeeded in making even more Gold-Medal standard connections. 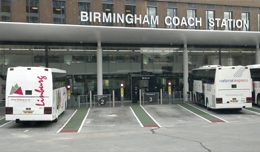 When National Express needed a reliable and trusted Contractor to step in at Short-Notice to cover the extremely-busy 330 Service from Derby to Penzance during 2011, they turned to their long-time loyal allies at Linburg Coach Hire. A prompt response and some trade-mark hard work from drivers, engineers and management staff at Linburg ensured uninterupted continuity of service for holiday-makers and people visting family and friends on the National Express 330 Service. 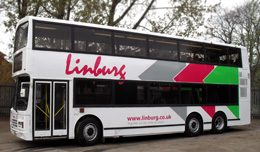 Following the award of 3 School Contracts at Friesland School, Long Eaton, Linburg Coach Hire are delighted to have been awarded a Commercial Contract for the School.

In order to fulfill this contract we have added 94 seat double decked buses, fully fitted with seat-belts, to our fleet. Ideal for transporting two or even three school classes on one, economical vehicle. Sales Director, Gill Dawson believes this will open many more opportunities for the Derby and Sheffield branches. 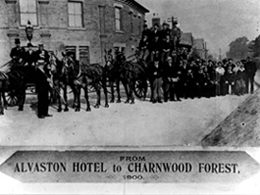 Linburg Coach Hire has significantly strengthened its commitment to its customers in the East Midlands with the opening in November 2010 of a new Derby Operating Centre.

Having buses and coaches permanently stationed in the centre of the City of Derby has further increased Linburg’s ability to support its existing customers who include National Express, East Midlands Trains, CrossCountry Trains and Derbyshire County Council. It also means that Linburg Coach Hire are able to provide professional bus and coach hire services to new customers in the corporate sector, schools, clubs and societies in the Derby and Nottingham areas.

For Operations Director, John Hadaway, this has been something of an overdue business homecoming. His Great Grandfather, William Potter, pictured here on the left, operated horse-drawn coaches in Derby at the beginning of the Twentieth Century. Business was brought to an abrupt holt however when, on the outbreak of The Great War, the Company’s horses were requisitioned by the Army for the war effort. William’s best horse however never made it out of Derby let-alone to the frontline, as unused to being saddled and ridden by an Army Officer, it bolted complete with rider, straight through the plate glass window of The Midland Drapery on St Peters Street in Derby, where the horse died of its injuries. Nearly one hundred years later, John is excited to be picking up the reigns on behalf of his Great Grandfather, bringing his own many years of professional coach hire operations experience back to Derby, supported by Linburg Coach Hire Sales Director, Gill Dawson, also a Derbyshire resident.

Things have changed a lot in a hundred years. Modern, powerful and smooth Linburg luxury coaches with air-cushioned suspension, ‘Royale’ reclining seats, air-conditioning and Central-heating can be seen everyday. The Linburg Coach Hire team for the Twenty-First Century will be delighted to discuss your own group travel needs. 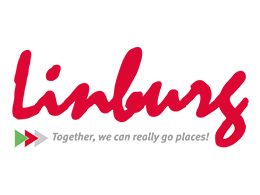